Back to all guides

Best wireless routers to buy in 2022

Facebook
Twitter
LinkedIn
Reddit
WhatsApp
Telegram
Are you in the market for a high-end router but confused about where to look?
While most people stick with the router they’re given by their internet service provider, those that upgrade to a dedicated home wireless system will feel the full benefits of a strong, secure, and reliable internet connection throughout their home or office.
Wireless routers come in a range of prices, typically from £100 up to £500 for the very best devices. In this guide, we’ll review some of the best WiFi routers that will suit a range of budgets.
See guide sections

The latest version in Google’s range of wireless routers, the Nest WiFi is one of the best all-round devices currently on the market. It’s a mesh router, which means it consists of a main router as well as a number of satellite units so you can extend your WiFi signal to every room in your home. This makes it particularly suited to large homes and even offices.

However, the best feature of the Google Nest WiFi is that each extension unit comes pre-installed with a Google Home smart speaker, which can truly turn your property into a ‘smart home’ fit for the 21st century.

The router itself, as well as its extenders, have a sleek, modern design, but are also small enough to hide out of view should you want to. It’s also one of the most affordable mesh routers around, and the set-up process is one of the smoothest we’ve come across. 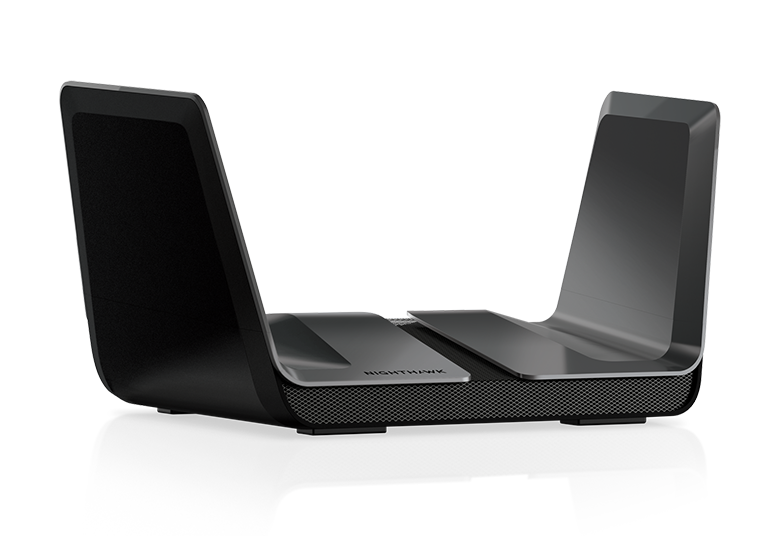 This is a high-end, powerful router available at a mid-range price. The Netgear Nighthawk AX8 supports WiFi 6, the latest and greatest generation of WiFi technology. In fact, it’s currently one of the most affordable routers capable of supporting this technology, but don’t let its seemingly low price-point put you off.

The Nighthawk AX8 promises massive amounts of bandwidth up to 6Gbps, and in reality it performs well, supporting multiple connected devices at high speeds simultaneously. While the signal is strong enough to penetrate walls and ceilings, it does seem to wane after around 50 feet, so this router is more suitable for medium-sized households.

The device itself looks more like a mini spaceship straight out of a Star Wars film as opposed to a traditional router, but it’s straightforward to set up and it also comes with built-in security features including parental controls. 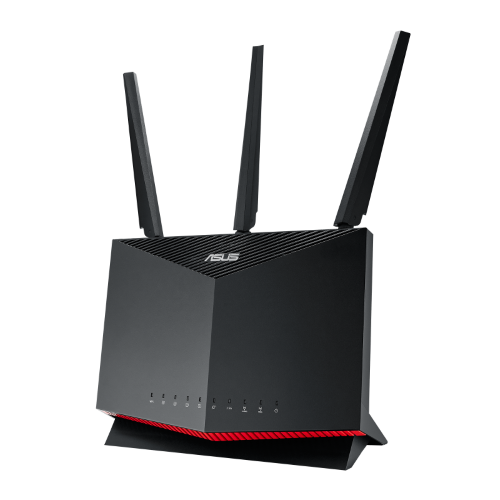 Another powerful router supporting WiFi 6 technology, the Asus RT-AX86U is a reasonably-priced high-end router designed with gamers in mind. As well as the high speeds of up to 1Gbps it provides, gamers will be particularly pleased by the low latency it promises. It also has a number of nifty features that serious gamers will enjoy, including the ability to prioritise gaming traffic.

The Asus RT-AX86U isn’t just for gamers, however, as it also performs well as an all-round family router. It’s signal strength is impressive and it has a decent range, with the option to add mesh devices for extended coverage should you need it.

It’s not the cheapest router on the market by any means, but considering it supports the latest WiFi 6 technology, as well as the fact that most gaming routers are at the more expensive end of the scale, we believe this Asus model to be good value for money. What’s more, it comes with a lifetime protection against malware and other online security breaches. 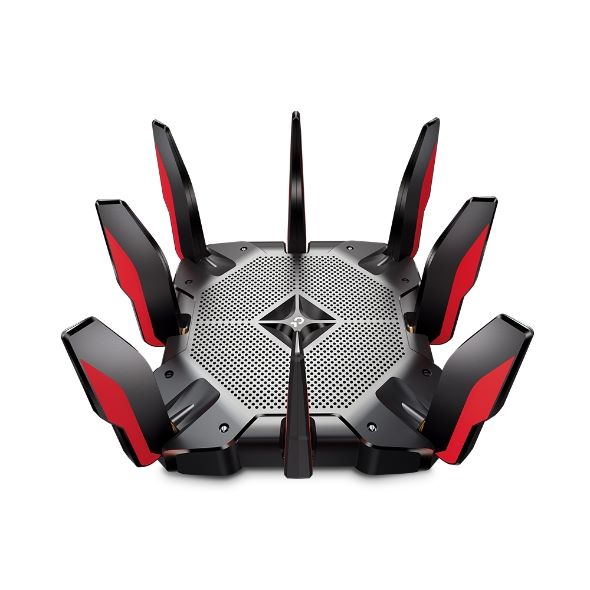 This futuristic-looking router from TP-Link doesn’t come cheap, starting at just under £400, but this price tag is justified by the fact that its one of the best all-round routers currently available on the market.

Supporting a highly-impressive maximum bandwidth of 11Gbps, the Archer AX11000 is a future-proof device, and it also supports the latest high-speed WiFi 6 technology. And with eight Ethernet ports, you can hook up multiple devices to your connection with wires should you need to.

This router also comes with a wide range of cool features, including a user interface designed for serious gamers as well as multiple anti-malware and security features. If you’re willing to pay whatever it costs for the latest and greatest wireless router technology, then you won’t do much better than the TP-Link Archer AX11000. 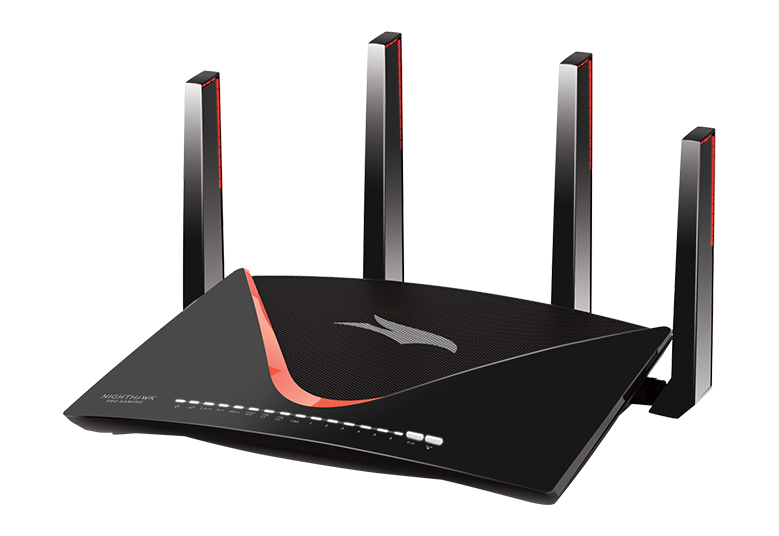 This high-end router from Netgear is without doubt one of the best on the market for gamers and other heavy internet users. And at around £400 a piece, the high power and impressive performance of this piece of machinery is reflected in its price.

Don’t be put off by the price, however. If you can afford it, you can’t get much better than the Netgear Nighthawk XR700. It supports a maximum bandwidth of 7.2Gbps, and it also has 10 gigabit-capable Ethernet ports for blisteringly-fast and ultra-stable wired connections.

What makes the Nighthawk XR700 stand out, however, is its built-in software features designed to make online gamers’ experiences as smooth as possible. It prioritises bandwidth to your gaming devices, meaning you should never feel a drop-off in performance including any lag or buffering, while it also has a number of cool features on its user interface. 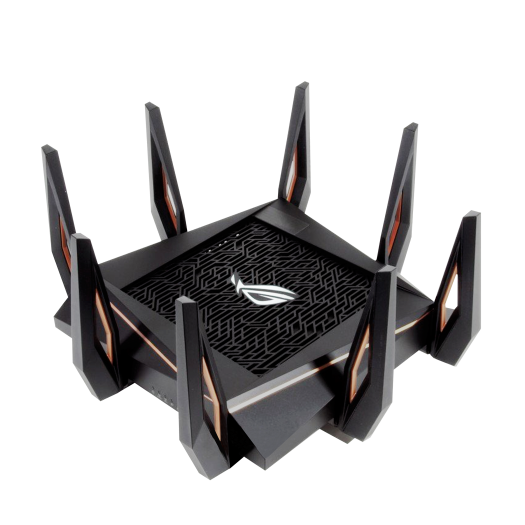 This is another top performing gaming router that supports WiFi 6 technology, this time from Asus. The Rog Rapture GT-AX11000 supports a maximum bandwidth of over 1Gbps, and it provides impressive speeds over a long range, meaning it’s a great device for larger households. And if there’s pockets of your home it won’t reach, you can extend its coverage with mesh units.

It’s large and chunky design may seem a bit garish to some, but its eight rotating antennas allow for its impressive range. It also has a number of nifty, customisable software features, including the ability to prioritise certain devices over others.

These features have been designed with gamers in mind, and it also has low latency - important for any gaming fan. However, this router isn’t solely for gamers. Anyone wanting a strong, stable connection for all their home devices should be satisfied with the speed and reliability of the Rog Rapture GT-AX11000. 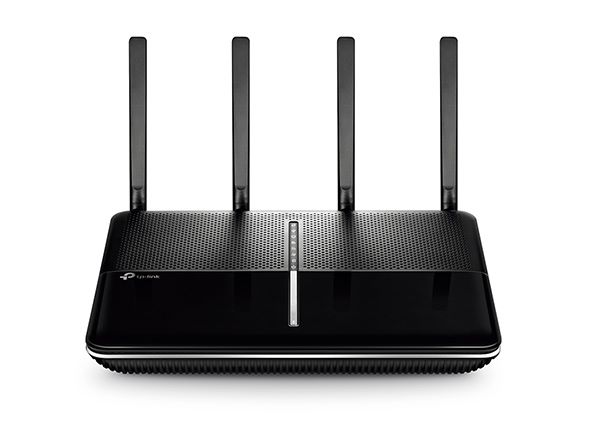 You can get the TP-Link Archer VR2800 for less than £200, meaning it’s at the cheaper end of the scale. And by looking at the design, this won’t surprise you much - it looks much like a simple, basic router you’d get from any broadband provider.

But don’t be fooled by its looks or its relatively low price - the Archer VR2800 offers an outstanding and reliable high-speed performance. It supports up to 2.8Gbps of bandwidth and it also has an impressive range for such an unassuming machine.

The Archer VR2800 is simple and quick to set up, while it also has an easy-to-use interface that allows you to manage multiple devices in the home, including setting up parental controls on any devices your children have access too. 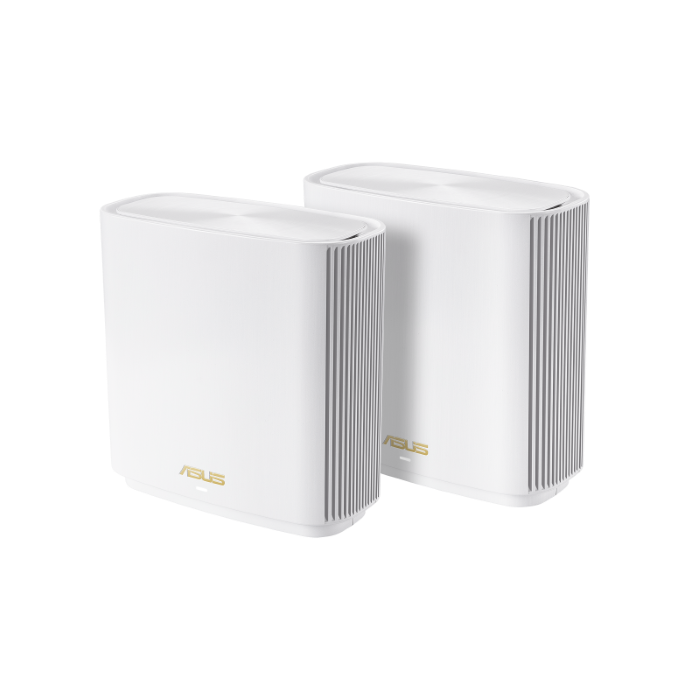 This reasonably-priced router from Asus combines WiFi 6 technology with mesh routers, meaning reliable, high-speed connections in every room of your home. There is, however, a limit of just two mesh units, so this may leave the largest households wanting a little more. But at a cost of around £200, the ZenWiFi AX (XT8) is at the more affordable end of the scale.

It has a stylish, albeit simple, design compared to some other high-end routers on the market, and it offers a lightning-fast and reliable connection over a decent range. It also comes with a number of impressive security features. As WiFi 6-capbale mesh routers go, you won’t find much better value than the Asus ZenWiFi AX (XT8). 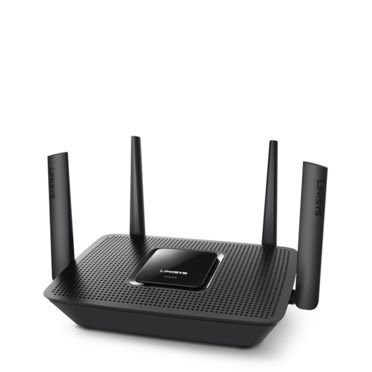 This router from Linksys packs in a lot of power to a relatively small and unassuming device. It offers reliable WiFi speeds of up to 2.2Gbps, and all for under £200.

However, the Linksys EA8300 Max Stream is held back by its relatively short range. This means that larger households and offices should look elsewhere for wireless routers, but for small to medium-sized households, this device should be enough for everyone’s needs.

The best thing about the EA8300 Max Stream is that it’s fully customisable. This means you can set up parental controls and other security features, as well as prioritise bandwidth for certain tasks of your choice, be it 4K video streaming or online gaming. And all of this can be done via your smartphone. Definitely not a bad router for this price point. 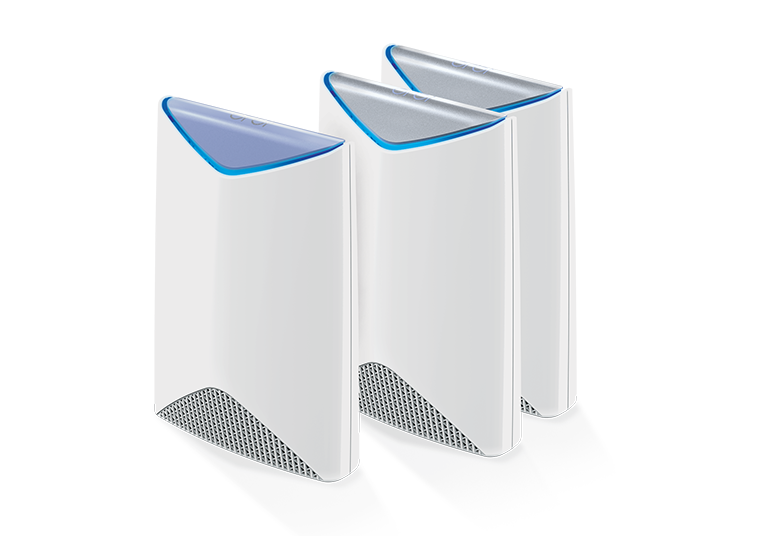 This mesh router from Netgear was designed specifically with businesses in mind, and it certainly backs this up by providing a strong and reliable connection to every corner of your office. It’s also very reasonably priced, especially considering the potential losses your business could face should your internet connection or servers go down at any point.

It supports up to 3Gbps of bandwidth, which should be more than enough for most small businesses. It also has a neat and simplistic design so that it won’t look out of place sitting in the corner of your modern and stylish office.

Back to guides
Switch your broadband over the phone