Back to BT
Choose a topic

BT, one of the most well-known broadband providers in the UK, currently offer a range of fibre deals at varying prices. All of these fibre deals, including BT Fibre Essential, should be sufficient for most internet users by themselves, although larger households and those who play online games should consider the faster packages.

But how do you know which one to go for? Should you go for the cheapest, or the fastest? What’s the difference between them, and what are the alternatives? Read on to find out.

BT fibre deals at a glance

BT’s entry-level fibre package, BT Fibre Essential offers average download speeds of 36Mbps for a very reasonable price of £25.99 per month. These are standard fibre speeds, and while it won’t blow you away, it should be more than enough for a small household of light internet users. It also comes with unlimited downloads, as do all BT fibre deals, so you can browse to your heart’s content.

However, according to a survey conducted by Ofcom, BT Fibre Essential customers were receiving an actual average download speed of just over 27Mbps, which is almost a quarter less than what is advertised.

For just £3 extra a month, you could upgrade to BT Fibre 1. This package offers average speeds of 50Mbps, which would be more suitable for a household of four who like to stream videos online at the same time. According to Netflix, you need at least 25Mbps to stream 4K ultra-HD content (compared to 5Mbps for standard HD), so you could theoretically have two people streaming 4K content simultaneously with BT Fibre 1.

According to Ofcom, the actual speed that BT Fibre 1 customers get is just 35.7Mbps, which is in fact lower than the advertised speed for BT Fibre Essential. The upload speed of 9Mbps is also the same as BT Fibre Essential, so if you use your home internet connection for work then you may not see the benefit of upgrading from BT's basic fibre package.

BT’s fastest fibre package before getting to full fibre, BT Fibre 2 offers speeds of 67Mbps for £30.99 a month. This should be more than enough speed for even the busiest, largest households. With 67Mbps, two people can be streaming ultra-HD content at the same time without any issues, while an HD movie can be downloaded in around 8 minutes.

However, BT Fibre 2 customers are getting average speeds of 61.5Mbps in reality. While this is lower than the 67Mbps advertised, it's only around 8% lower, so it's actually to closer to its full potential than cheaper BT deals. The upload speed you get is also double that on BT Fibre 1, so if you work from home and upload files regularly, we would definitely recommend BT Fibre 2 over BT Fibre 1.

This is where we start seeing serious download speeds. BT’s full fibre deals use fibre-to-the-premises (FTTP) connections to deliver internet to your home. This means that your entire connection is made up of fibre optic cables (the last section from the street cabinet to your home is made of copper wires with an FTTC connection). With average download speeds of 150Mbps, BT Full Fibre 100 would be enough for a large households of serious gamers.

For £49.99 a month, you can get average download speeds of 300Mbps with the BT Full Fibre 300 deal. Pretty much any household will be satisfied with this package, as it will allows up to 12 users to stream HD content simultaneously, and you can download an HD movie in around 2 minutes!

The fastest download speeds available with BT are now a whopping 910Mbps, and frankly there’s not much you can’t do online with these speeds. It’s on a par with some of the fastest speeds available from any broadband provider in the UK, but at £59.99 a month it’s certainly not cheap. It’s also not yet widely available, with full fibre coverage from Openreach currently spanning just 11% of the country.

According to Ofcom's survey, the actual speed that BT Full Fibre customers receive is slightly lower than advertised, but at just between 2-4% lower, the difference is negligible.

Equipment: Does every BT fibre deal come with the same router?

No. Depending on which level of package you go for, the router you receive will be slightly different: 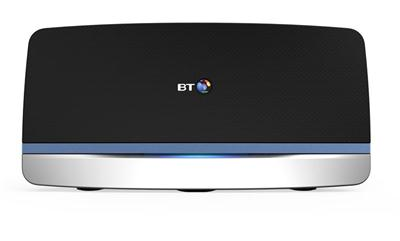 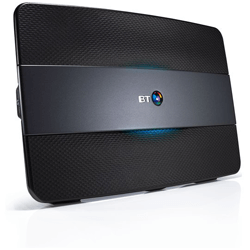 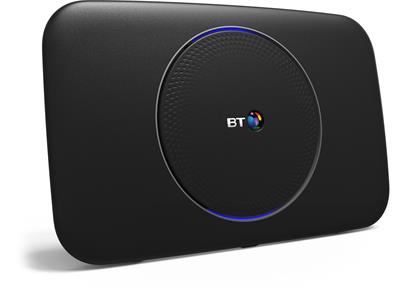 TV: What add-ons are available?

None of BT’s fibre deals come with a TV package as standard, although you can choose to add a subscription if you wish.

In terms of a pre-packaged broadband and TV bundle, there are three options, all which come with Fibre 2 broadband (67Mbps):

BT’s entertainment package comes with all the Freeview channels as well as AMC, which is exclusive to BT customers. It also comes with a NOW Entertainment Membership, which gives you access to 14 premium channels including Sky One, Sky Atlantic and Comedy Central.

This sport package also gives you access to Freeview and AMC, as well as all 4 BT Sport channels (BT Sport 1, BT Sport 2, BT Sport 3 and BT Sport ESPN) and BoxNation.

With this comprehensive sport package, you’ll get everything on the Sport + Fibre 2 deal plus a NOW Sports Membership, which gives you access to all 11 Sky Sports channels. Together, you will be able to watch almost every Premier League game live. It also now comes with Eurosport 1 and 2.

However, you don’t have to necessarily be on BT Fibre 2 to take advantage of these BT TV bundle deals. If you’re a BT broadband customer on any of the other packages, you can simply choose a TV package as an add-on. The prices are as follows:

Please note that these TV add-ons also come with a £29.99 upfront activation and delivery charge for the set-top box.

All BT fibre deals come with line rental included, however they don’t come with free calls. All of their packages include pay as you go calls, but in today’s world this might not be so much of an issue as most people use their mobile phones to make calls rather than their home phone.

Coverage: Can I get it in my area?

If you’re thinking about getting BT Fibre Essential, BT Fibre 1 or BT Fibre 2, then you may be in luck as these packages are currently available in over 91% of addresses* in the UK. BT’s Full Fibre deals, however, are only available in 21% of homes so far. To see what packages are available where you live, pop in your postcode into the box at the top of this page.

BT Fibre Essential (36Mbps) currently costs £25.99 a month, but for the same price you can get almost double the speed with Plusnet’s Unlimited Fibre Extra package (66Mbps). But if 36Mbps sounds like enough speed for your household, then you should also consider NOW’s Fab Fibre + Free Anytime Calls Package for just £23 a month.

BT Fibre 1 (50Mbps) will set you back £28.99 a month, but for £29 a month you could be getting superfast broadband with Hyperoptic’s Fast 150Mbps broadband deal. However, this is a broadband only deal (no line rental included), and is currently only available in limited pockets of urban areas.

For a deal with similar speeds, you could try your luck with Community Fibre’s Superfast package, which offers average speeds of 50Mbps for just £20 a month. However, like Hyperoptic, Community Fibre is only available in limited areas.

BT Fibre 2 (67Mbps) will cost you £30.99 a month, but as an alternative you could be getting Plusnet’s Unlimited Fibre Extra + Evening and weekend calls package. The speed is essentially the same (66Mbps), but you do of course get free calls included, which you won’t with BT.

If you’re looking for this speed but want to pay a little less, have a look at TalkTalk’s Fibre 65 package, which costs just £24 a month for 67Mbps.

BT Full Fibre 100 (150Mbps) costs £39.99 a month, but you could be getting Origin’s Max Fibre & 4K TV Bundle for the same price. While you’re download speed won’t be nearly as much (67Mbps), you will get a TV package included, giving you access to over 150 channels as well as a subscription to both Amazon Prime Video and Premier Sports.

In terms of similar packages offering speeds of 150Mbps, you should consider Hyperoptic’s Fast 150Mbps deal if it’s available in your area, as it’s considerably cheaper at just £29 a month.

BT Full Fibre 300 (300Mbps) currently costs £49.99 a month. But for £49 a month, you could be getting triple the speed with Community Fibre’s Gigafast deal (920Mbps). However, Community Fibre only covers certain areas of London, so chances are you can’t get this deal where you live anyway.

Alternatively, you could be getting 300Mbps for just £34 a month with Gigaclear’s Ultrafast 300 with Smart WiFi package, although this is another provider with limited coverage – this time in certain rural areas with no other access to full fibre.

BT Full Fibre 900 (910Mbps) will set you back £59.99 a month, which is certainly isn’t cheap, but it’s similar to what you’ll pay for the same speed from other providers like Vodafone and Gigaclear. However, if you want to sacrifice speed for entertainment, you could be paying £62 a month to get Virgin Media’s Bigger Bundle + Movies (108Mbps) or Sky Superfast Broadband + Sky TV + Sports (59Mbps).

But if it’s those gigabit speeds you’re after, a cheaper alternative would be Hyperoptic’s Fast 1Gbps Broadband only deal at just £39 a month. However, as we said before, if this deal is available where you live then you’re one of the lucky few.