Back to Hyperoptic
Choose a topic

Hyperoptic offer blisteringly fast speeds to their customers using their own gigabit network, but it is extremely unlikely that they will be available in your area. If you can go with Hyperoptic, should you?

When I moved to my current flat I saw Hyperoptic signs dotted about the building. I didn’t recognise the name but they promised upwards of 150Mbps download speeds in my building.

This all sounded great, but I had been stung before. At my previous place I was told I could get a 300Mbps connection on the Openreach network only to discover when I spoke to an actual provider using the network that I could not access these fibre cables.

I was told I could sign up for an 18-month contract and would have the option to upgrade to fibre as and when the cabling got extended (if I started another 18 month contract, of course). I ended up opting for a 4G router in the end.

Fast forward two years and, despite my scepticism, I decided to take the plunge with Hyperoptic and take out a 12-month contract. Three years on, I can’t see myself with any other provider.

Hyperoptic is one of the few ISPs to operate its own proprietary cable network rather than relying on the more widely used Openreach network. Their network is new, and all fibre to the property (FTTP); there are no ADSL connections in sight.

As a result they offer connection speeds of up to 1 Gbps everywhere they are available, which is more than most people should ever need.

Their setup means they have control over their network directly; if you have any issues you go directly to Hyperoptic and they will try solve the issue for you.

They don’t try blame any issues on the Openreach network, or say you have to wait 6 weeks for an Openreach engineer – they will send their own engineers (if need be) and will investigate any issues themselves.

The downside of this, however, is that Hyperoptic don’t operate in as many areas of the UK as providers who use the larger shared networks do.

Speed: Are they fast enough?

In my flat (I live with one other person) we have the 150 Mbps connection, and it is the best internet connection I have ever used.

Granted, I have never used a connection with this much bandwidth, but I don’t see myself ever needing much more than this.

I tested downloading a 2.4 GB update file on my Xbox and it took less than 10 minutes to download. Although this averages out at around 32 Mbps, this test was done whilst both my partner and myself were using the internet (albeit, only for web browsing / emails) and over a Wi-Fi connection.

Apart from their 50 Mbps package, all Hyperoptic deals come with the same upload and download speed (most other providers limit upload speeds to around 10% of their download speed). This really is exceptional if you deal with large files on a regular basis.

At the time of writing, they offer packages with speeds of 50 Mbps, 150 Mbps, 500 Mbps, and 1 Gbps. Considering the average download speed (according to Ofcom) in the UK is 71.8 Mbps, with the exception of their 50 Mbps package all their internet deals are over double the average UK connection speed.*

Hyperoptic broadband deals come in a range of prices, depending on the package you want and how fast you want your internet to be. If you’re happy with the basic package (most users should be satisfied with Hyperoptic’s basic package), then you can save a lot of money with Hyperoptic compared to other providers.

The entry-level Hyperoptic broadband-only deals start at just £22 a month, a price that’s unlikely to be beaten elsewhere for a similar service. If you want to upgrade to superfast broadband its just £28 a month, and the ultrafast package costs £38 a month.

But to benefit from the market-leading gigabit speeds, you will have to stump up £45 a month. This may sound pricey, but in terms of broadband speeds alone, it’s definitely good value for money.

And for just an extra £2 a month you could get line rental included too, and this applies to every package.

Getting set up with Hyperoptic was relatively straightforward.

I already had a Hyperoptic connection at my new property, so they were able to connect me pretty much immediately; all I needed was for their router to arrive. This quick turnaround was a pleasant as I have previously had to wait up to two weeks for my new connection to get set up with other providers.

Their router arrived the next day after signing up, and from there it was simple to get going. I had to plug in the router and call up Hyperoptic, who then set up the connection over the phone.

Within 10 minutes I was up and running.

If I didn’t have a Hyperoptic socket in my property already (note: Hypertoptic would still have to be available in my building) it would have taken longer to get set up.

They have to send an engineer round to install one of their sockets (remember they don’t use Openreach, so they can’t use their sockets) which takes around an hour (according to their website).

Their engineers are available 6 days a week - so if you have to go into work on weekdays you should be able to book a weekend appointment – and you can book them as early as the next day – if they have availability.

Installation is usually free of charge to new customers as well.

I have had my internet go down a handful of times in the three years I have been with Hyperoptic.

This was frustrating, especially when I have been working from home.

When the internet has gone down though, getting hold of Hyperoptic has been extremely simple.

They have a webchat service that actually sends you through to a real person and is accessible from your account dashboard. 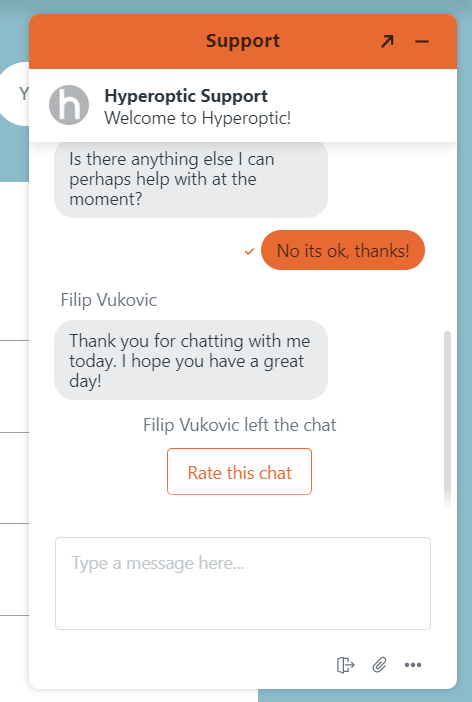 If that isn’t your thing then you can send them an email (support@hyperoptic.com) or call them (0333 332 1111). Having called them previously, their wait times are not very long (usually a few minutes at most), and their customer support extremely helpful (and UK based too).

They have the ability to log into your router remotely – which I found fascinating – and try debug any issues their end without sending out an engineer.

When my internet did go down for an extended period, they kept me informed via email of what was going on.

The two or three times this happened the issue was fixed within a few hours, and they gave me some money off my next bill as an apology.

Looking elsewhere on the Internet, it looks like other people’s opinions / reviews of Hyperoptic’s service are just as positive. They have a 4.7 out of 5 rating on Trustpilot from over 10,000 reviews, where most people reap praise on their customer service, price, and speed.

The main drawback of Hyperoptic is their availability. They are not widely available, at all.

Hyperoptic will mostly only be found in major cities like London, Manchester, Liverpool, and Glasgow.

But even if you live in a major city, it is highly unlikely you will be able to get a connection with them.

Hyperoptic is currently only available to around 400,000 homes and businesses across the country, and these tend to be in new-build blocks of flats.

However, the firm is working hard on expanding its operations to more and more cities up and down the country, hoping to be available to around 2 million premises by the end of 2021, and up to 5 million by 2025.

Hyperoptic do not offer any TV packages, so if this is important for you I would recommend you look elsewhere.

Considering their speeds and price though, it may well be worth taking out a Hyperoptic package and then opting for an online streaming TV plan (like NOW TV). You should be able to get most (if not all) of what you would be able to get with other broadband & TV packages, and take advantage of Hyperoptic’s blistering speeds at the same time.

Should you go with Hyperoptic?

The speeds they offer are lightning fast, and their customer service are extremely helpful.

Installation is a breeze, and their prices are extremely competitive.

If they are available in your building, then I would highly recommend you go with Hyperoptic.

Chances are though, they won’t be available where you are, and they probably won’t come to your area unless you are in a newbuild property (you can always register interest here Building Unknown | Hyperoptic).