Back to Plusnet
Choose a topic

Plusnet is well known in the UK for providing cheap, no-frills broadband. But how basic are their packages? In fact, the download speeds offered by Plusnet’s fibre deals match those of its closest rivals, and you’ll struggle to find them for a better price.

Plusnet currently offers two tiers of fibre connection: Unlimited Fibre and Unlimited Fibre Extra. But what’s the difference? And which package will be right for your household? Read on to find out.

Plusnet broadband deals at a glance

Plusnet’s entry-level fibre package, and the next tier up from their basic, ADSL ‘Unlimited Broadband’ deal, is known as Unlimited Fibre. It offers average download speeds of 36Mbps, which should be enough for a small household (1-2 people) of heavy internet users, or alternatively a large household (4+ people) of light internet users.

At £22.99 a month, it’s only £3 more expensive per month than Plusnet’s basic Unlimited Broadband, and it’s definitely worth the difference. Unlimited Broadband offers download speeds of just 10MBps, and you can’t find much slower than that, so if you want to use the internet for anything more than browsing the web and sending emails, you should go for Unlimited Fibre.

This is Plusnet’s fastest broadband deal, offering average download speeds of 66Mbps for a very reasonable price of just £25.99 a month. These speeds should be enough for most households; only those with multiple heavy users, such as avid online gamers, should consider anything faster than this.

It also provides average upload speeds of 18Mbps, which may not sound like a lot, but is a vast improvement on the speeds offered by other Plusnet broadband deals, and anything less might be frustrating for people who work from home.

Equipment: Will I get the same router with each Plusnet fibre deal?

Yes. Both the Unlimited Fibre and Unlimited Fibre Extra packages come with the Plusnet One Hub, which is a much-improved update on the Hub Zero which you’ll receive on the provider’s basic Unlimited Broadband package. 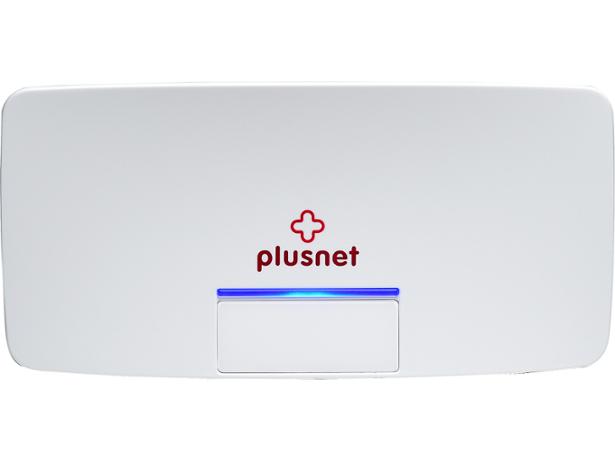 The Plusnet One Hub has two antennas for wireless connections – at 2.4Ghz or 5Ghz. It also comes with four Ethernet ports for fast, wired connections.

In most cases, the router will be sent to you to set up yourself which is simple enough, unless you don’t already have a phone line installed in which case an engineer will need to visit your property. There is currently no setup cost for Plusnet fibre deals, although these are subject to change.

Extras: Can I get anything else with Plusnet fibre?

Plusnet often include free gifts with their broadband deals, currently in the form of a Plusnet Reward Card. In the past, they have also offered Amazon gift cards and cashback cheques.

When you sign up to a Plusnet fibre package, you will be sent the pre-loaded card as well as an activation email. You must activate your card within three months of it being issued to you, and it is valid for 12 months.

As Plusnet uses the existing copper phone lines to deliver internet to your home, all Plusnet broadband deals come with line rental included. However, they don’t include any free calls as standard.

Unlike other major broadband providers, Plusnet doesn’t currently offer any TV bundle deals. But this doesn’t mean that you won’t have access to any TV subscriptions as a Plusnet broadband customer.

Your best option is probably NOW, who offer a range of TV membership passes (entertainment, sports, cinema, kids etc) which you can pick and choose from on a rolling, monthly basis, and watch on any connected device.

Plusnet Unlimited Fibre (36Mbps) will currently set you back £22.99 a month, but for just £22 per month you could be getting average download speeds of 63Mbps, as well as free calls, with NOW’s Super Fibre + Anytime Calls package.

In terms of speed, you’ll struggle to find a cheaper package offering 36Mbps than Plusnet Unlimited Fibre. The only provider offering this speed at a lower price is NOW with its Fab Fibre + Free Anytime Calls for £22 a month. This deal does, however, come with a £60 upfront installation fee.

Plusnet Unlimited Fibre Extra (66Mbps) costs £25.99 a month currently, but for just £25 a month you could be getting 100Mbps with Vodafone’s Superfast 100 package, although coverage for this particular deal is fairly limited so far.

Overall, Plusnet’s fibre broadband packages are good value compared to its rivals, especially big names like Sky, BT, and Virgin Media. After, that is what Plusnet does best.