Back to TalkTalk
Choose a topic

When it comes to fibre optic broadband, TalkTalk have various different packages to choose from with different speeds and prices available. But which of their fibre offers is right for you?

Here we explain the details of each of their packages, how they compare against each other as well as other providers in terms of speed and price, and what you can expect from TalkTalk as a provider should you opt to go for them.

TalkTalk fibre deals at a glance

TalkTalk have 5 different fibre offers, each of which falls under a different level. These levels are:

Packages from each of the levels offer unlimited downloads and a router as standard, but vary with their speeds and use of different technologies to connect you to the world wide web. We have below compared each of the packages TalkTalk have available to help you make the right decision:

TalkTalk Fibre is the company's base level of fibre optic packages. There are two available packages within this level: Fibre 35 and Fibre 65.

This package will be perfectly sufficient if you have fewer than 5 devices connected to your internet at once, so we would recommend it for smaller households with fewer people. You won't have any issues accessing high-definition video content from Netflix or Amazon Prime, but this entry package isn't suited to downloading and uploading large files.

Although TalkTalk advertise an average download speed of 38Mbps, according to independent research by Ofcom the average speed users across the UK usually achieve is closer to 32.5Mbps. This is 14% slower than the speed advertised by TalkTalk. Be aware that the speed you get will vary depending on where you live and how far away your home is from your local cabinet.

Fibre 65 is TalkTalk's second level fibre optic package. Downloads average at 67Mbps, and uploads average at 18Mbps, making this quite a bit faster than their 35 package.

You shouldn't encounter any issues with more than 5 devices concurrently used on this internet connection, so should be sufficient for medium sized households with multiple people using the internet at once. Downloading and uploading large files shouldn't be too much of an issue, and if you’re an online gamer you will see an improvement in ping and less lag.

When compared against the 35 package, the 65 package offers quite a leap in terms of bandwidth and speed for not that much more cost. The 65 costs £3 more per month, but considering it is 76% faster (on average) we think this is money well spent.

Independent research again shows, however, that the average UK user experiences a speed around 13% less than that advertised by TalkTalk on this package. The actual speed you receive you will be affected by how far your home is to the street cabinet, among other factors.

This 'full fibre' offers much faster speeds, lower ping, and the ability to connect to the internet without the need for a landline.

Both of TalkTalk's Future Fibre packages comes with unlimited usage, as is standard across TalkTalk's fibre broadband service, their Wi-Fi Hub, a managed install, and their Supersafe Security package.

Now for the bad part - the technology used to connect you to these pacakges is not as widely available as TalkTalk's base FTTC packages (the 38 and 65 offers) as it is newer and is not widely rolled out yet.

Furthermore, neither of these packages come with the ability to make calls, so if you need access to a home phone then we recommend you look at the base fibre packages or a different provider.

TalkTalk say the package will easily handle 10 or more devices at once, and we are inclined to agree.

As we said above though, this package does not come with the ability to make calls. If this is important to you, you should look elsewhere.

The second of TalkTalk's superfast Future Fibre connections, the Fibre 500 offers average download speeds of 500 Mbps and upload speeds of 75 Mbps. An internet connection this fast should be able to handle anything you throw at it, including large file uploads and downloads, fast paced online gaming, and streaming multiple 4K films at once in different rooms.

Compared to the Fibre 150 TalkTalk deal, the 500 connection offers over 3 times the bandwidth for just £3 extra a month. We do think the 150 deal will be sufficient for most households though, so we would only really recommend you upgrade to the 500 package if downloading and uploading large files is the norm in your household, or you feel the need for the latest and fastest technology to connect you to the internet!

There is only one package in TalkTalk's 'Ultra Fibre Optic' level, so let’s get to it:

The TalkTalk Fibre 900 package offers speeds of (you guessed it) 900 Mbps on average. This ultrafast broadband plan is classed as 'full fibre' by TalkTalk, which is just another name for Fibre to the Premises (FTTP).

The package comes with everything included in the Future Fibre packages, including the new TalkTalk Wi-Fi Hub, a managed install, and their Supersafe Security package. On top of this, as this package comes with a phone line (so you will have the ability to make phone calls!) unlike with TalkTalk's other 'full fibre' packages.

Starting at £27.50 per month for 24 months, this package offers an unrivalled bandwidth per GBP not seen anywhere else on the market; you will be hard pressed to find a 900 Mbps or gigabit package cheaper than £27.50 per month. Unfortunately, this package is not available in many places yet, so it is very unlikely you will be able to take advantage of this offer from TalkTalk for now.

Equipment: Do all TalkTalk fibre packages come with the same router? 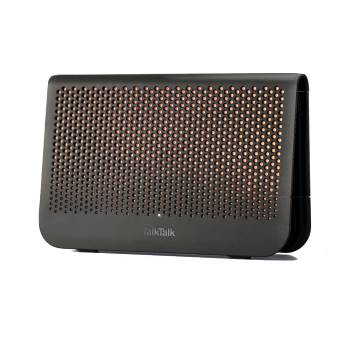 Both devices have similar names, and a slightly difference appearance, but in terms of technical specifications they are pretty much the same.

The older Wi-Fi Hub Black is made by Sagemcom and the newer Wi-Fi Hub is made by Huawei, however both have been made to the same technical specification. The difference between the two is largely cosmetic.

For those people who don't understand the above technical jargon, here is a brief synopsis of what these routers come with:

Both of these routers come with:

Can I get TalkTalk fibre in my area?

Most likely; TalkTalk entry fibre packages are available via Openreach FTTC technology, which is available to 91% of addresses in the UK.

If you are wanting to take advantage of this provider's 'Full Fibre' packages though, you will need to have a bit more luck as it is currently only available in just over 10% of British homes.

How do TalkTalk Fibre packages compare to other providers?

When looking at TalkTalk's entry fibre package there is some stiff competition from other providers. We can't honestly say that the Fibre 35 package is the best deal available at this price point.

Both NOW and Plusnet offer pretty much the same speeds for around the same price on shorter term contracts. Furthermore, NOW include unlimited anytime calls for the first 12 months, making this a much better package in our opinion.

In terms of the the 65 package, TalkTalk offer a very competitive deal at a good price.

The BT Fibre 2 package is around 36% more expensive than TalkTalk's offering, and many other providers like Plusnet and John Lewis are just as expensive as BT.

If you are looking for the cheapest package available in this speed range, however, it is difficult to match Vodafone's Superfast 2 deal, which is £3 a month cheaper but offers a slightly slower (6%) average broadband speed.

The 150 package is very well priced and competitive. The only other provider that can beat it in terms of price is Hyperoptic, but they are not widely available so it is unlikely you will be able to take advantage of this provider.

If you are looking for a broadband deal in this speed range, we do not think you will be able to much better than the TalkTalk Fibre 150 offer (as long as you only need your internet connection for data and don't care about a landline phone!).

This broadband package by TalkTalk offers pretty much unrivalled value for money. With the exception of Hyperoptic, no other ISP can beat TalkTalk at this speed in terms of price; you will end up saving around £120 per year (or more) by opting for TalkTalk over its competitors.

The TalkTalk Fibre 900 package is the best gigabit package available in the UK right now (in terms of price).

It is cheaper than competitor packages from rival ISPs like BT and Vodafone. If you are able to take advantage of full fibre broadband, we would recommend you go with TalkTalk over any other provider based on these savings alone.