Back to Virgin Media
Choose a topic

Virgin Media TV: At a glance

With over 245 television channels and over 50 high definition options, Virgin Media offer one of the most extensive and versatile ranges of TV options for customers - up there with Sky and BT.

They offer a huge range of channels, packaged in different sized bundles with optional add-ons like films or sports available so that you can tailor your selection based on what you watch most.

How much does Virgin TV cost?

Here's a summary of the different Virgin Media deals that come with TV:

Which channels are available on Virgin TV?

Virgin TV comes in two basic tiers or packages: Mixit TV and Maxit TV. The channels you get will depend on which Virgin Media bundle you get and which add-ons choose.

Mixit TV is Virgin's most basic package and comes as part of the Big Bundle broadband deal.

Mixit TV is pretty basic. It mostly just includes all the standard Freeview channels that you don't have to pay for anyway, along with various streaming players like iPlayer, all4, Youtube and Vevo.

In total it has just over 100 channels. What you're paying for here is basically just the Virgin 360 set top box.

Maxit TV is the next level up and is the base package with premium channels that you'll get as part of the Bigger Bundle and Ultimate Volt packages.

The base-level Maxit package is similar to the basic Entertainment packages you'll get from the likes of BT or Sky. It includes things like Sky One, Comedy Central, Fox, educational channels like History and Discover, and more.

It also comes with BT Sport 1, 2, 3, ESPN, and Ultimate as standard, which does set it apart from some competitors.

In total it's got just under 200 live TV channels.

As with most other pay TV providers, Virgin offer various add-on channel packages that you can use to personalise your bundle. They include:

Virgin TV subscribers get access to the Virgin Store on their set top box, which has a range of films and TV shows that you can pay to own or rent.

It’s got a pretty good selection, and there are regular ‘deals of the week’, which will mean cut prices on sets of films grouped by series or theme. Some films you’ll be able to watch on the Virgin Store while they’re still showing in the cinema, but you’ll often have to pay up to £19.99 for the pleasure. Most other films cost somewhere between £7-13.99 to watch. 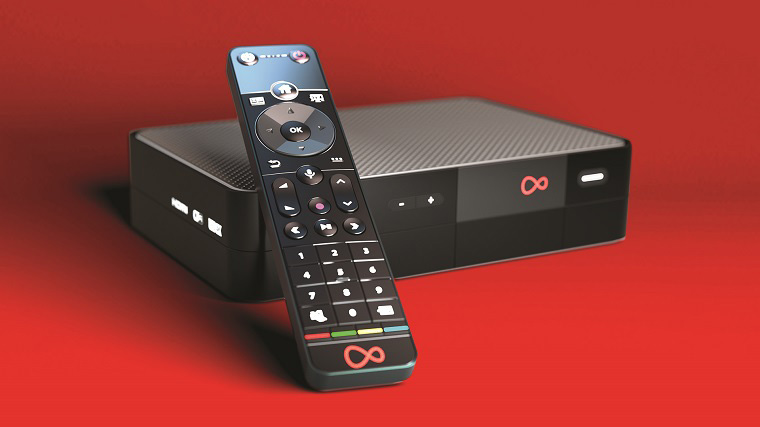 Virgin TV 360 is the latest set top box hardware and platform that comes with any Virgin TV deal. It does everything you’d expect as far as watching, streaming, and recording TV goes. If your TV can handle it, the Virgin 360 box will broadcast compatible shows in 4K Ultra HD as standard.

You can set profiles for the different people in your house, which function much like they do on Netflix, keeping track of the shows you’ve watched and your favourite channels, and offering personalised recommendations. 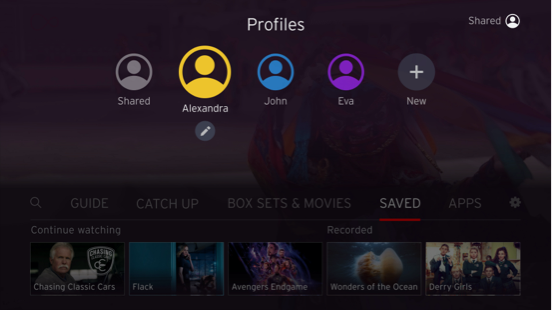 It’s got a voice control function that works via a mic on the remote, which is handy if potentially unnecessary. If you’ve got a Google Home or an Amazon Echo that you use around your house though, you’ll probably like this addition as it’ll fit seamlessly into your voice-activated home digital ecosystem.

How does Virgin compare to Sky and BT?

By now, most major pay TV providers are very closely comparable. You’ll get similar selections of channels from each at various price points, and extra features like online stores for renting or buying films or access to streaming platforms are available across providers.

Sky does have some channel exclusives – you won’t get Sky Atlantic on either BT or Virgin, for example. And depending on your sports preferences, you might prefer BT or Virgin which include BT Sport as standard on their basic premium packages. You’ll need to pay extra to get Sky Sports no matter which provider you pick.

It’s hard to compare pricing in a completely like-for-like manner because of the different broadband speeds each provider bundles in with their TV.

For example, Virgin’s Big Bundle with Drama & Docs is comparable in price to Sky’s Superfast Broadband + TV deals (give or take £3-4). Sky’s deal has a better TV selection, but Virgin’s has much faster internet. Ultimately, working out which is better value for you depends on whether TV or internet is more important for you.

Can I get Sky Atlantic on Virgin TV?

You can’t get Sky Atlantic on Virgin TV. It is only available with Sky or NOW TV.

Can I get BT Sport on Virgin TV?

BT Sport comes as standard on every Virgin bundle that includes Maxit TV.

Can I get Sky Sports on Virgin TV?

Sky Sports is available as part of an add-on to any Virgin TV package.

Do I need to have Virgin Media broadband to get Virgin TV?

Virgin TV is currently only available to Virgin Media broadband customers. Sky is the only major TV provider that sells TV packages independent of broadband deals.