Back to Virgin Media
Choose a topic

Virgin Bigger Bundle: At a glance

How do the Bigger Bundle packages compare?

At both speeds, a full HD film will download in a few minutes and you'll be able to play online games without running into any trouble. You could easily have five people browsing at once without seeing performance dip.

However, as a general rule of thumb, the more people there are in your household sharing the same connection, the higher broadband speed you'll need. So, if you live in a large household with multiple online gamers or Netflix bingers, we suggest going for a higher speed to be on the safe side.

It's worth noting, however, that the speeds you will be able to access will largely depend on the fibre capacity in your area. If you are lucky, you'll be given the chance to upgrade to one of Virgin's faster connections. Again, if you've got a house full of people all doing data-intensive activities at once, it's worth considering this.

All of the Bigger Bundle packages come with Virgin Media's 'Maxit TV' package as standard - the next step up from the 'Mixit TV' package that comes with the Big Bundle. You would, of course, be forgiven for not actually knowing what any of these words mean.

Maxit TV gives you over 190 channels, including everything you'd expect from a basic Entertainment selection, plus some key Sky channels (namely Sky One), Fox, Nat Geo, Discovery, etc.

Importantly, Maxit TV also includes BT Sport, which is normally only available as part of a more expensive Sports channel add-on. Bear in mind that to get Sky Sports channels, you'll still need to get that add-on.

For more information, check out our page on Virgin Media TV.

Let’s take a look at each of the Bigger Bundle packages and see what they offer:

This is currently the cheapest option when it comes to Virgin Media’s Bigger Bundle. With this package, you’ll get everything that Maxit TV provides, as well as access to 8 Sky Cinema channels. You’ll find some of the biggest blockbusters and recent releases on these channels, plus a whole host of classic films to suit the whole family.

With download speeds averaging 108Mbps, the broadband connection you get with this package should suit most medium to large-sized households.

While the BT Sport channels come as standard with any of the Bigger Bundle packages, that’s not the case for Sky Sports. So, if you want to watch almost all the big games throughout the season, consider the Bigger Bundle + Sports package which also comes with 8 premium Sky Sports channels.

This is the most comprehensive Bigger Bundle, so it’s also the most expensive. It comes with all of the Maxit TV channels, the Sky Cinema channels included in the Movies package, and the 8 Sky Sports channels that you get with the Sports deal.

The speeds on this package are slightly disappointing, however, being the same as the other basic Bigger Bundle deals. It provides average download speeds of just 108Mbps, and upload speeds of 10Mbps. You should remember, however, that this is still faster than the average connection in the UK, and it should suit most small to medium-sized households.

If you want all of the TV options that this package provides, but with a faster broadband connection, consider forking out a little extra for the Ultimate Volt Bundle. This provides market-leading average download speeds of 1,130Mbps, while it also includes a 10GB mobile SIM from O2.

For each of the Bigger Bundle packages, there is an upgraded version available for a few extra quid, called Bigger Volt Bundles.

In terms of TV, these packages are essentially the same. However, the Bigger Volt Bundle packages come with a 10GB mobile SIM from O2, while they also come with improved broadband speeds.

This offers the same download and upload speeds as the Movies bundle does, but will cost you £84 per month.

You'll get the new Virgin Media TV 360 set top box with your tariff. It's advertised as 4K Ultra HD and HDR ready, but this isn't necessarily a unique selling point - you'll get no different from other big hitters like Sky or BT. A set top box is a set top box, after all. 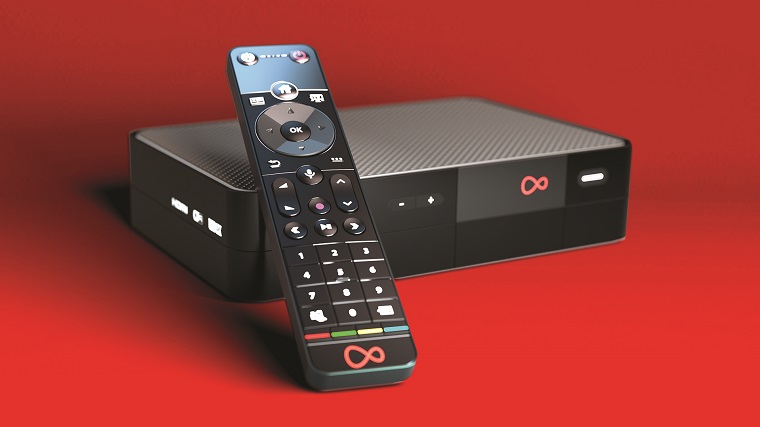 The 360 box does offer voice control functions, which are fun if not totally necessary. Otherwise it does everything you expect it to (watch, stream, and record TV).

You've got the option to add two 'Mini Boxes' that give you viewing/streaming functionality on other TVs round your house, but this will add £15 a month to your tariff.

The Bigger Bundle includes a UK landline with free weekend calls (to other UK landlines and Virgin mobiles). For most users, this won't matter much as not many people use landlines any more, but it's nice to have all the same.

Non-weekend calls, or calls to other mobiles, will cost extra anyway, so if a landline is important to you, you might want to think about upgrading to an anytime calls package for a bit more money each month.

Price: Is it worth it?

The Bigger Bundle starts at £39.99 a month at the moment, and there's currently no installation charge for new customers across all Virgin Media products. This is pretty good value for what you're getting. You'll struggle to get as many TV channels and similarly fast broadband for less elsewhere.

If you want the comprehensive package with sports and movies, however, you may want to consider whether you'll be better off paying a little bit extra for the Ultimate Volt package (at £85 a month).

Alternatively, if you want fewer channels, you can get the cheaper Big Bundle deal (for £29.99 a month), but bear in mind you'll get average download speeds of just 54Mbps at standard.

All of these Virgin bundles currently come with free installation and setup for new customers - this works out to a saving of £35.

Choosing between the Bigger Bundle and other Virgin Media broadband deal is a matter of working out how many channels and what kind of download and upload speeds you need. But how does it compare to similar offerings from other broadband providers?

BT's closest equivalent in terms of TV channels is it's Entertainment + Fibre 2 plan, which starts at £48.99 a month. However, the broadband speed is slower (67Mbps), and it's got fewer channels overall. You will get Sky Atlantic on BT though, which you won't get on Virgin, so if you're particularly keen on HBO programming, it's something to think about.

Sky's Ultrafast Broadband and TV bundle currently costs £66 per month, and it offers stiff competition to Virgin Media's Bigger Bundle packages. You get Sky Ultrafast broadband (at 145Mbps), and their basic Entertainment TV package, which comes with more channels than Virgin's Maxit (including, of course, Sky Atlantic). Adding a sports package will bump the cost up significantly though, so if you want to watch a good portion of the Premier League games on BT Sports, for example, you might still be better off with Virgin's Bigger Bundle.