Facebook
Twitter
LinkedIn
Reddit
WhatsApp
Telegram
Whether you’re looking for a camera to take your hobby to the next level, or simply something that can let you relive your travels in better quality than your phone can, a good camera makes all the difference in the world.
With hundreds of models out there, and some costing over several thousand pounds, it can be difficult to know which to purchase. This is why we’ve scoured the market for the best budget digital cameras. They’ve also been separated into 3 categories to help you find what you’re looking for with greater ease.
See guide sections 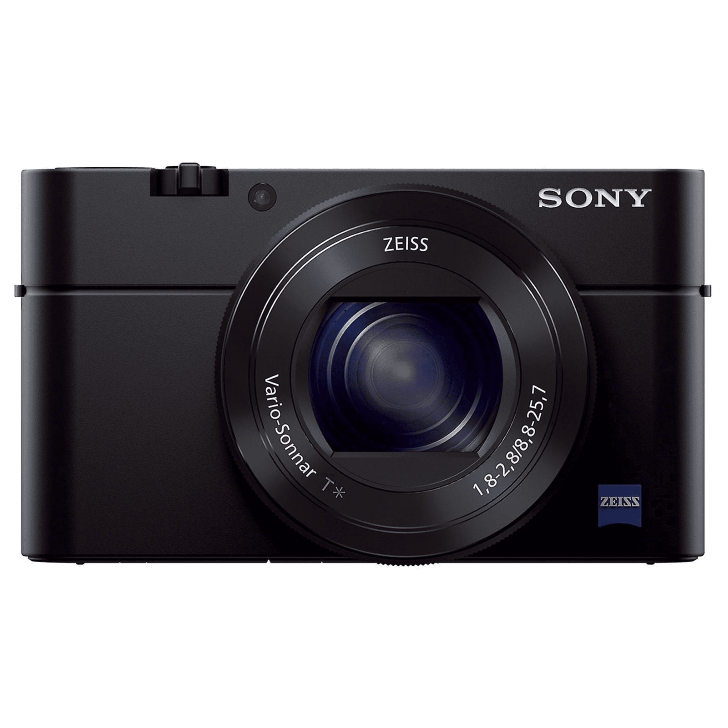 While the Sony RX100 III is far from the latest model in the RX100 range, it’s available at a much lower price. It’s far more capable than previous models, and comes with several helpful features.

It makes use of a tiltable screen, great for when you’re taking photos at difficult angles. The faster start-up is also a welcome addition, meaning you’re less likely to miss an unexpected shot. Being able to quickly transfer photos to your phone through the NFC is another excellent feature, as it removes the frustration of searching for cables and transferring them manually. 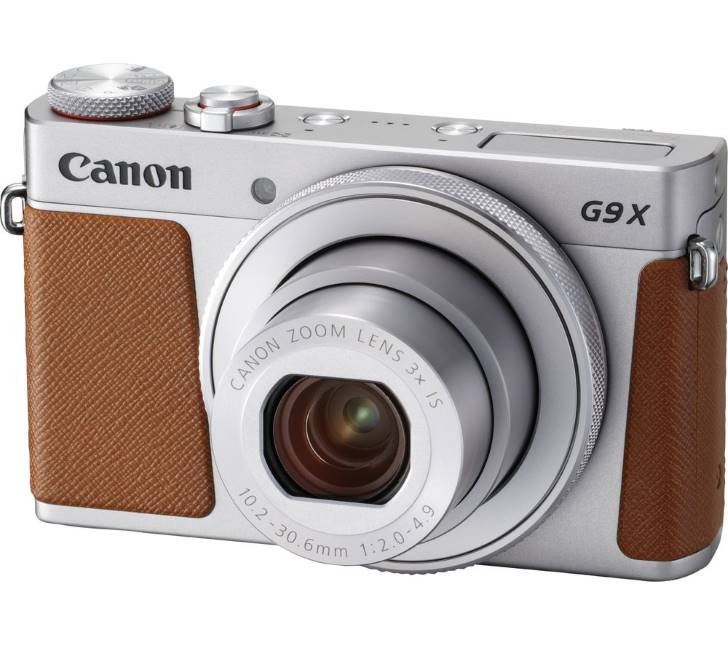 The Canon G9X is a very good-looking camera. The all-metal construction makes it a sturdy camera too, while its compact size makes it ideal for transportation. It also possesses some impressive features, such as a variety of shooting modes.

One feature the Canon G9X lacks, however, is the option to record in 4K. It’s a feature that is becoming increasingly common, and the fact that it’s absent from the G9X is a shame.

The touchscreen LCD offers users the ability to immediately take control over their images, rather than having to wait and edit them after the shoot. Since this is so easy to do, it allows budding photographers to make edits with very little experience. 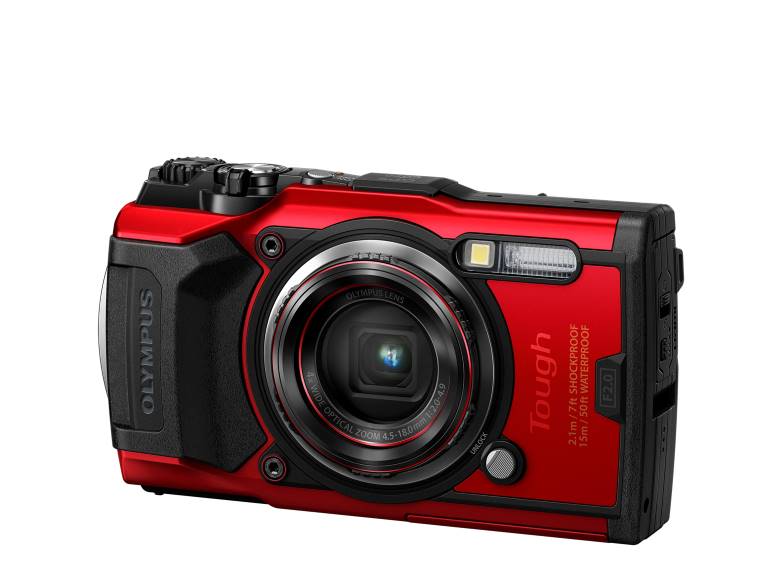 If you’re looking for a tough, all-weather camera that can withstand bumps and drops, this could be the one for you. The Olympus Tough is hands down the best survival camera available, so if you’re looking for an adventurous companion to record your greatest thrills, this is a solid choice.

You may think that the 12MP lens is a downgrade, but by not having as many pixels, the Tough is better equipped to deal with various low light situations - like underwater shooting. The photos are also captured RAW, so you can recover any hidden details with some careful editing.

The Olympus Tough TG-6 model isn’t wholly different from the previous TG-5 model. There have been some minor updates, such as the inclusion of new underwater modes. Ultimately, if you’re going to buy one then choose the TG-6. If you already have the TG-5, though, an upgrade isn’t really necessary. 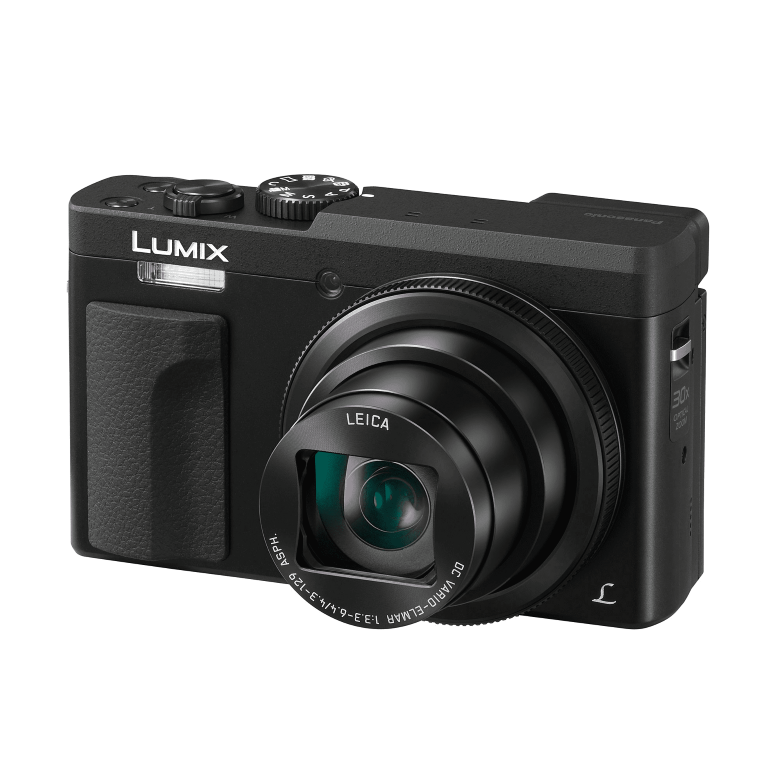 With a slim and compact body, the Panasonic TZ90 is the perfect holiday and travelling camera. Able to take incredibly long-distance photos with its 30x zoom, you can capture extraordinary images from a hotel balcony or hillside cottage.

However, the viewfinder is small and difficult to use, but this can be bypassed by using the flip-up touchscreen LCD instead. The LCD is exceptional for taking high-quality selfies, or even recording vlogs.

The TX90 is extremely useful for recording heart-warming family moments. Thanks to its 4K recording, you can keep impeccable videos that let you relive your favourite moments in perfect clarity. 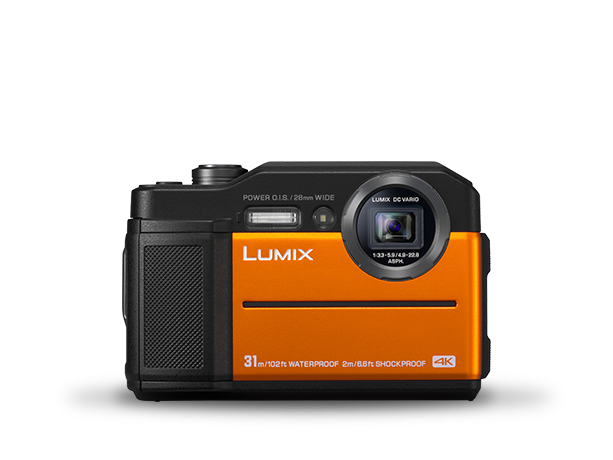 Another incredibly capable and tough camera, the Panasonic FT7 is able to withstand just as much punishment as the Olympus Tough TG-6. It also makes use of a 4.6x zoom, which is especially useful if you want to capture underwater wildlife without getting close enough to disturb it.

The waterproof rating of the FT7 is impressive, capable of reaching 31m (102ft) without any issue. This makes it one of the deepest operating cameras available without additional protective housing.

If you are interested in keeping the raw file and examining the extra data yourself, you’ll find that the FT7 is not capable of doing this. The Panasonic instantly compresses it into a JPEG format, and while this may be fine for casual photographers, the more experienced may find this disappointing. 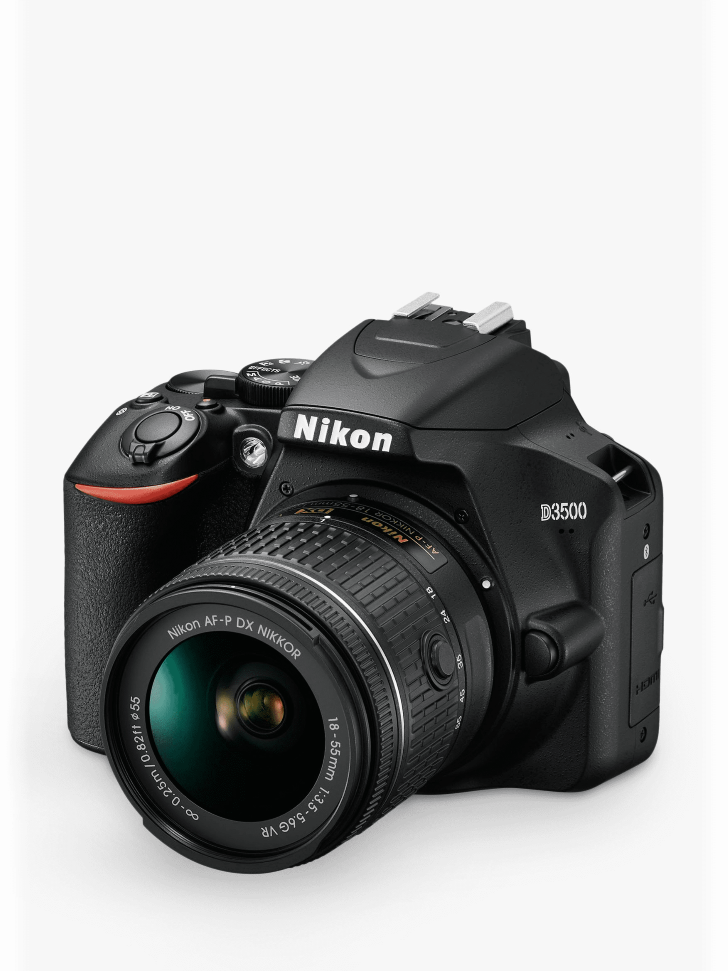 An option for those who may be interested in the world of photography, but aren’t yet ready to invest thousands in a professional camera. The Nikon D3500 is available at an affordable price and offers many features (like 5fps image capture, 100-25600 ISO light-sensitivity, and Guide Mode) to help new photographers develop their skills.

Like most cameras aimed at the entry-level market, the D3500 is missing a lot of premium features that make the more expensive models worth so much. The LCD isn’t touchscreen and it is also missing WiFi connectivity, GPS, and both headphone and microphone jacks. But that is to be expected, especially when considering its very affordable price.

Ultimately, it’s an exceptional first DSLR camera and a great purchase for anyone looking to take up photography as a hobby, or learning how to take professional photos. Thanks to its compatibility with various lenses and accessories, the D3500 is an investment that should last you for years. 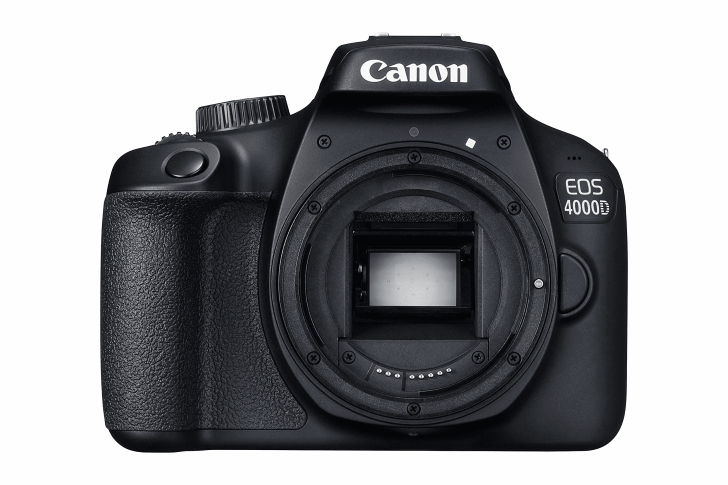 One of the least expensive options when looking at a DSLR camera, the Canon EOS 4000D is a decent option for new photographers. It may not offer a whole lot in terms of specifications, but you should also bear in mind that this is the cheapest DSLR camera on this list.

The WiFi connectivity is an excellent tool that not only allows you to share and back up your photos, but even lets you use your phone as a remote control. Why not use your imagination to take photos from interesting and unusual angles?

The Canon EOS 4000D is undoubtedly a basic DSLR, but one that is designed to help you get to grips with the basic functions of a camera. It’ll serve you well until you’re ready to upgrade, and once you need to frequently change lenses, you’ll know it’s time to upgrade. 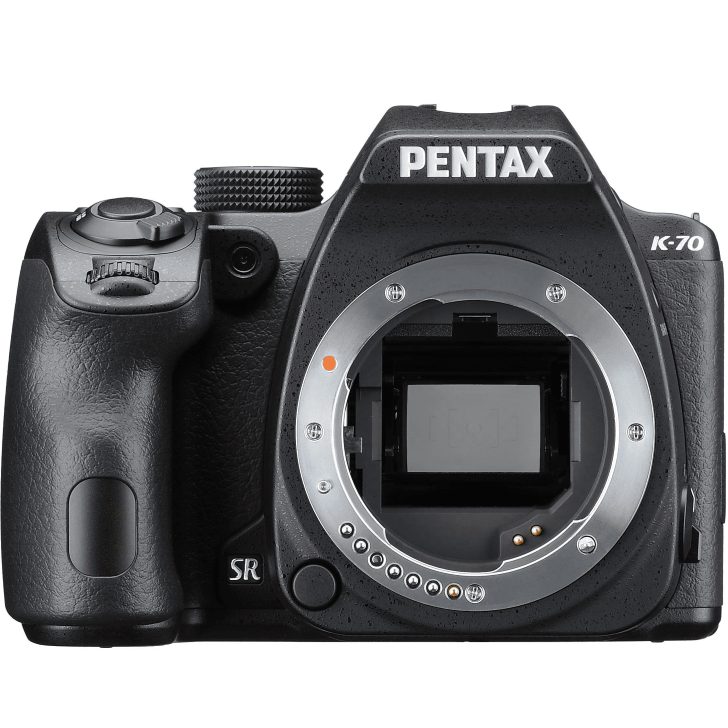 An ideal option for beginners, the Pentax K-70 is an extremely capable DSLR. While there are some areas in which it doesn’t stand up to competitors, intelligent usage of the ISO sensitivity can produce high-quality images with an equivalent of 12,800 ISO.

The 5-Axis Sensor-Shift feature is an extraordinary one. Whilst the majority of cameras may opt for a lens-stabilisation system, applying it to the sensor instead is able to make it adaptable across multiple different lenses, and allow it to make many more correction movements.

The Pentax K-70’s photo quality is incredible and better than most of its competitors. It might be the most expensive DSLR of the three, but it is by far the best value for money too. There are a couple of minor issues, but that will always be the case with cameras at this price point. 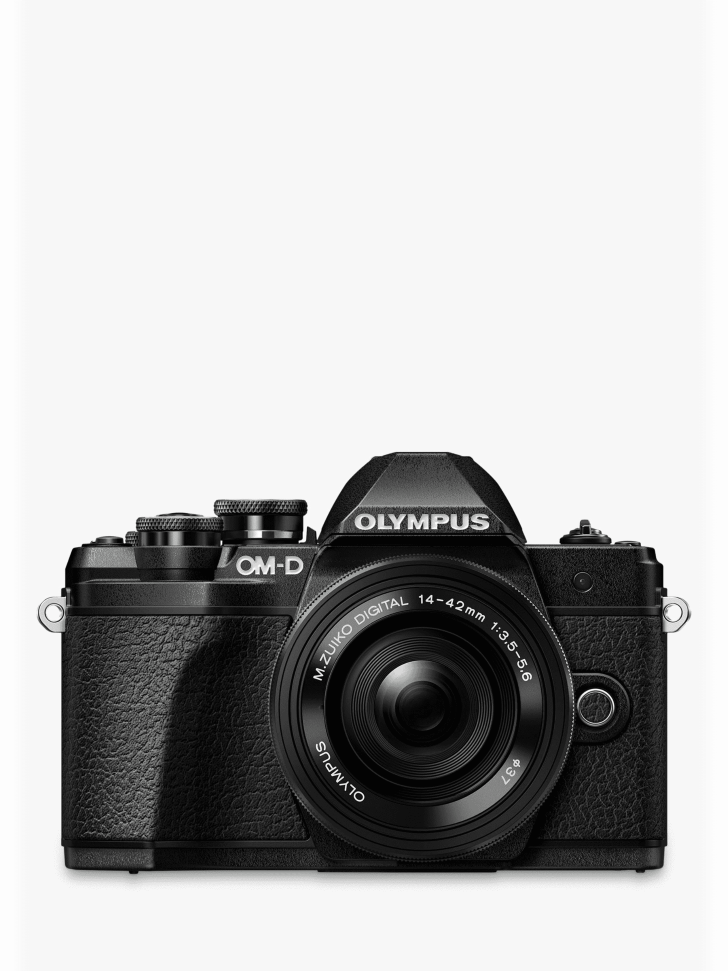 While the Olympus OM-D E-M10 Mk III hasn’t drastically improved compared to previous models, the focus has instead been on providing the easiest photography experience possible. This makes it ideal for complete novices who understand little about the technical aspects of photography.

The small size of the Olympus Mk III is highly advantageous too, as it makes it far more portable than other, larger cameras. This, in turn, means it’s a suitable alternative to your phone camera. Using the Olympus Mk III, you’ll easily be able to capture incredible images of far better quality than any smartphone is capable of. 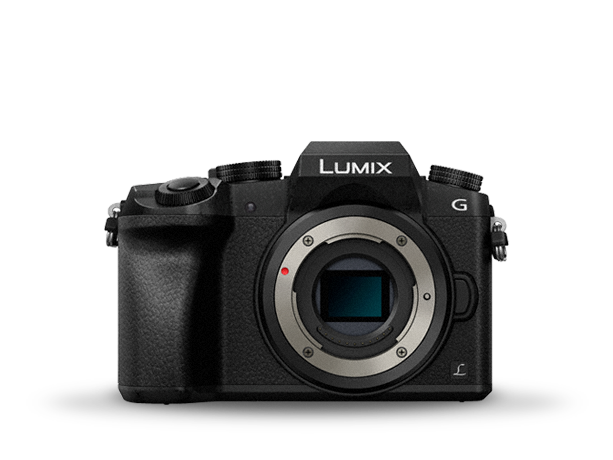 A very good-looking camera and one able to capture 4K stills, the Panasonic Lumix DMC-G7EB-K is definitely a mouthful. But that doesn’t change the fact that it’s a very capable mirrorless camera that can easily suit your needs.

The Micro Four Thirds sensor may not be as good as alternative cameras with an APS-C sensor, but as an entry-level model, this isn’t too important. There are additional features which make up for it, such as the OLED viewfinder, which is extremely useful for letting you pick up on any minute details prior to capturing the image.

It might not be the very best camera on the market, but it is an extremely solid choice for anyone wanting to avoid paying premium prices for 4K features. 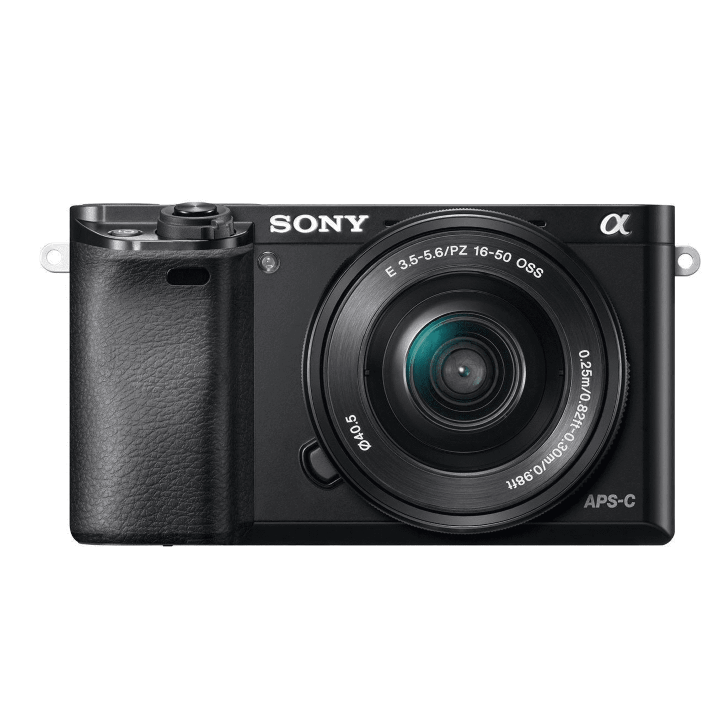 Even though the a6000 was released back in 2014, it’s still a phenomenal camera and able to easily hold its own compared to newer models. In fact, its age actually means the a6000 is available at an incredible price.

The UI may look a little outdated, and there’s a lack of 4K video recording. Regardless, upon launch, the a6000 competed with midrange cameras. Now? The reduced price means it falls into the entry-level category, where it is easily one of the best options you can get your hands on.

Ultimately, thanks to the sheer quality of the Sony a6000, this is one of the best entry-level cameras you can purchase.

So, no matter what type of camera you’re interested in, these are the best you can get on an entry-level budget. Whether you’re just looking for a portable camera to take better holiday pictures, or you want to take up photography as a hobby (or even a career), these cameras are the best ones currently available to help you reach your goals.

With the government poised to implement tough new measures to...

Budget broadband provider TalkTalk has been notifying customers via email...

A year-long investigation by charity Citizens Advice has revealed a...

Education Secretary Nadhim Zahawi has announced a new commitment to...